A politician's dilemma: sermon for the Kirking of the Council 2013

In Kirking of the Council, Sermons, Worship

In the name of God, Father, Son and Holy Spirit, Amen.

You might think that today’s readings are more appropriate for Good Friday than for the Kirking of the Council. But whenever I read or hear the sequence of stories in the Gospels about the last days of Christ’s life, I’m always struck by how public the events are. Today we’ve read of the encounter of Jesus with the most powerful government on earth at the time.
Just as few days earlier, on Palm Sunday, when Jesus entered Jerusalem, riding on a donkey, to be welcomed by crowds who called him a king. During the week the tension built, as Jesus became mired in controversy. He turns over the tables of the moneychangers in the temple. He argues about faith and morals with the religious leaders. They try to catch him out with a political question about whether they should pay taxes to the Roman occupiers. So he has a coin brought, with the emperor’s head on it, and says that they should pay to God what belongs to God and to Caesar what belongs to Caesar. Meanwhile, there is discontent among his own closest followers. Soon after celebrating the Passover meal with his friends, one of them betrays him, and he is arrested by the religious authorities. At a hastily arrange hearing in the middle of the night at the house of Caiaphas, the high priest, Jesus is tried for blasphemy, and found guilty. 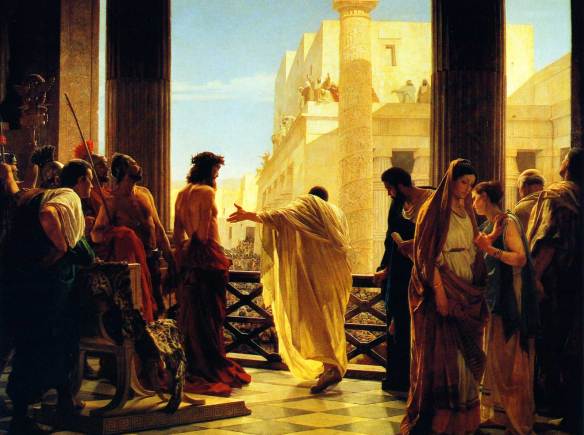 And then the religious authorities have a problem. The penalty for blasphemy is death, but they do not have the power to carry out such a sentence. That is reserved to the civil power, and it is the Roman governor, Pontius Pilate, the local representative of the Emperor Tiberius Caesar, who is the civil power in this case. So they take him to Pilate’s headquarters. It sounds as if Pilate has heard of what is happening, and so he tries to palm them off: ‘Take him yourselves and judge him according to your law’. But they want Pilate to deal with him, and they subtly alter the charge, from blasphemy (a religious matter which would not concern the governor) to a charge of sedition. They tell the governor that Jesus claims to be a king. Now it’s a political charge.
We know from other sources that Pilate had a hard time dealing with the unruly province of Judea. The population was sullen under Roman rule. And they clung to tenaciously to their religion. It’s not surprising that in some historical sources, Pilate comes across as heavy-handed, unnecessarily inflaming religious tension, acting brutality to deal with insurrections against Roman rule. (He seems to have been recalled to Rome eventually, after one especially bloody encounter). But perhaps the hardest decision Pontius Pilate ever made was what to do about Jesus.
While Jesus and Pilate have their dialogue inside the headquarters, outside, a crowd which seems to get larger as the morning wears on, is demanding, cajoling, arguing- we might say lobbying today- for Pilate to execute Jesus. Rome was no democracy. But like today’s politicians, Pilate cannot ignore the voice of the people. He would have felt the pressure on him as he had his conversation with Jesus.
Right at the beginning of their conversation, Pilate asks Jesus, ‘Are you the king of the Jews?’ It’s the sedition charge which the religious leaders have reframed to get Jesus into trouble. Pilate is trying to work out if Jesus really is a rebel against Roman rule, threatening the peace of this Roman province. But Jesus is not that kind of leader.
There’s a story a little earlier in this Gospel that when he was arrested, someone tried to defend him, and ended up cutting off a slave’s ear- but Jesus reprimands his disciple for doing so. Although the violence of the cross lies ahead, Jesus does not threaten violence. ‘If my kingdom was of this world’, Jesus tells the governor, ‘my followers would be fighting to keep me from being handed over’. His kingdom is ‘not of this world’, he says.
That does not mean that Christ’s followers are not to concern themselves with ‘this world’. This world is a world in which war and military might are too are too often seen as solutions to our problems. But even as they face the problems of this world, Christ’s followers should by attempting to commend the values of that other world which we believe is to come- the kingdom of peace and justice which the prophets of the Bible looked forward to.

This was memorably expressed in Martin Luther King’s famous phrase, ‘I have a dream‘ which he said was deeply rooted in American values of equality. So, for example, he said, ‘I have a dream that my four little children will one day live in a nation where they will not be judged by the color of their skin but by the content of their character’. And at the end of that passage, Baptist preacher that he was, King sums it all up by saying by quoting the Bible:

King’s dream was deeply rooted in the prophet traditions of the Bible. It was a dream of another world, a better world, a vision to move people in their struggle- and it was a hard struggle, the struggle for racial equality in the United States, and it is not over yet, either in that country or across the world. But the words of the prophets- Amos and Isaiah, and Jesus, and Luther King- still stir us to seek those dreams.
Earlier in that speech, King had warned the civil rights members to avoid the temptation to use violence for their cause. He cautioned,

‘We must not allow our creative protest to degenerate into physical violence. Again and again, we must rise to the majestic heights of meeting physical force with soul force.

Chamber and organ music at the Old High Church

This site uses Akismet to reduce spam. Learn how your comment data is processed.